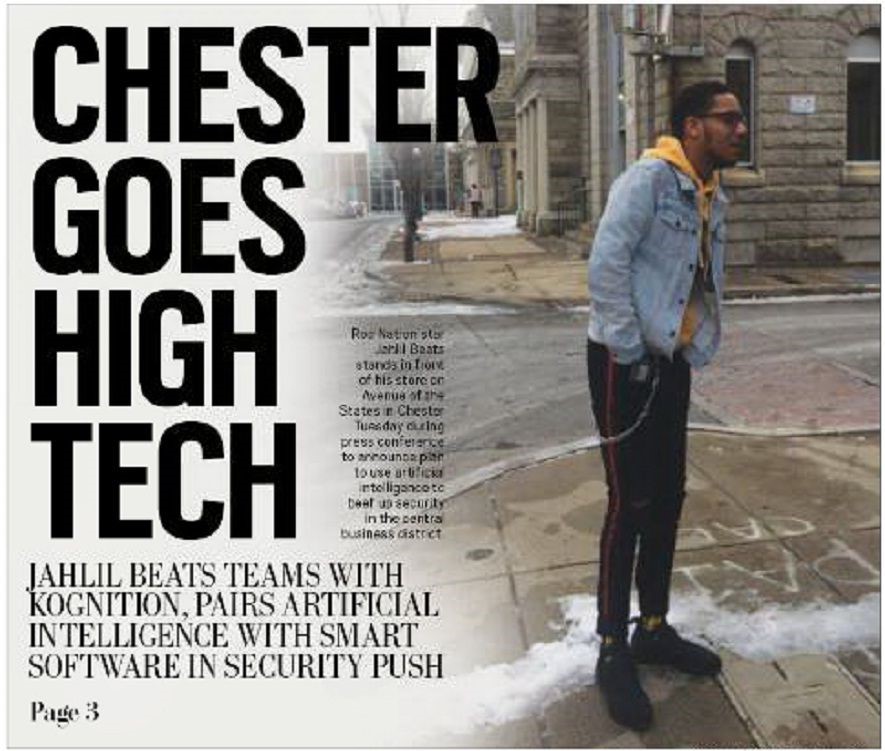 CHESTER — Jahlil Beats has not forgotten where he came from.

Even as the Chester native, born Orlando Tucker, has gone to achieve platinum success as a music producer, songwriter and businessman, he continually returns to his hometown to share what has been bestowed upon him — whether it’s hundreds of toys at his annual toy giveaway in December or box fans in the summer or in his latest venture, an artificial intelligence system that will enhance security in the Avenue of the States area of the city.

“When I made enough money, I just wanted to give back to the community, building up the economy,” he said. “That’s why we have the store.”

Kognition CEO Matias Klein demonstrates what the AI in Chester will look like.

Stressing his top priority is creating jobs for the community, Beats said another priority is “just showing people that you can be young and black and come from poverty and come back and build up your community. My city supported me so much. It makes me want to come back and do these things.”

From a youth, Beats was passionate about music and has produced for a variety of artists including Jay-Z, Chris Brown, DJ Khaled, Lil Wayne, Meek Mill, 50 Cent, Drake and more. In addition to forming his own music label group, Tandem Enterprises, he’s also developed DTLR Villa, a premiere lifestyle footwear and apparel retailer with more than 125 stores in 13 states throughout the Northeast and Midwest, including the one at 500 Avenue of the States.

The AI system is a collaboration of Beats with Kognition, an intelligent property solutions company, and is expected to be installed by the end of March and operating by early summer. It is expected to provide real-time situational analysis to help protect residents.

“What’s happening is the computer is taking the real time video from just any camera, not our camera but anybody’s camera, and then it’s looking for things in the video,” he said, looking at a laptop screen where several frames of a Manayunk street were displayed. “That’s a person, a dog, that’s a bus.”

He said the system identifies objects and then sends that information to humans.

“What we’re going to do is we’re going to start sending those alerts to a human being to look at them to say, ‘Hey, we detect a guy in the street with a gun,'” Klein said. “Then, let a human look at it and go, ‘No, no, not a gun, ignore it’ or ‘Yeah, actually, it is a gun, alert the police.'”

He also talked about the capabilities of the system.

“It can get down to facial recognition,” Klein said.

The command center for the system is planned to be located at the Triangle Building at Fifth and Edgmont streets.

“We’ve talked about wanting it to be a cool, inviting place, a place where citizens from any side of town can come, where police can come and it’s a place where they want to go,” Klein said. “Think like an Apple store, not like boring, security command post. (It’ll be) a cool place for the community. It’s the community’s public safety infrastructure.”

Chester Mayor Thaddeus Kirkland spoke of what this means for the city.

And, Kirkland added, “It also encourages folks to be a part of the rebirth of our downtown, Overtown, here in the city, to want to come down and shop and mingle and see the new technology that is being brought here in the first city in the Commonwealth of Pennsylvania.”

The mayor explained that it has the potential to begin transforming a perception.

“Folks are always talking negatively about our community at times – and wrongfully so – and so now, this will give them the inspiration to come down and be a part of our rebirth,” Kirkland said.

He praised the partnership between Tandem/DTLR and the city, especially in relation to this recent venture.

“It’s a good fit for the community this type of technology,” he said. “It does nothing but make us a better place to live, grow and raise your family.”

Beats explained why he wanted to bring this AI technology to his hometown.

“We come from lower-income housing, poverty,” he said. “A lot of these people are a product of their environment so when it comes to lower income housing and poverty, crime comes with it. We don’t want to target people, we just want to make downtown district safer.”